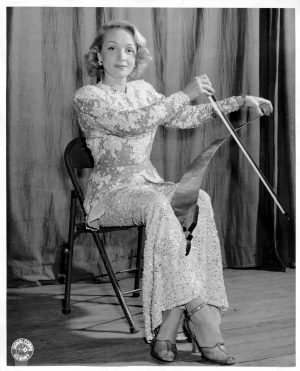 New York, New York, April 11th, 1944
So you’ve never seen Marlene Dietrich play the musical saw? Well, you probably never will – – unless you’re in the army and overseas. The siren lady who owns the world’s most publicised legs also owns a carpenter’s practical tool and makes music with it; but only for servicemen to whom she is now playing at army camps in the Mediterrenean area under the auspices of USO-CAMP SHOWS through arrangement with the Hollywood Victory Commmittee. With her are comedian Danny Thomas, actor-singer Milton Frome, comedianne Lin Mayburry and pianist Jack Snyder.
Miss Dietrich has owned her musical saw ever since 1929. That was in Vienna and she played it in a musical show called IT’S IN THE AIR. It really was in the air, too. The tones made by the saw seemed to come from nowhere at all so the producer tossed the number out of the production. Since then it’s been packed away in its most patent leather case. Miss Dietrich never planned to put it to any use but when she was rehearsing her Camp Show routine in New York she found she needed another number and remembered the saw. 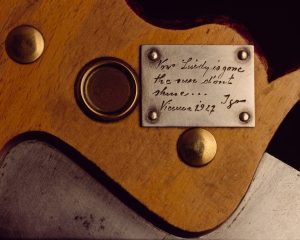 Digging it up out of ist shiny, black case brought back old memories. On the handle of the saw is a little plaque which bears the inscription „Now Lindy Is Gone the Sun Don’t Shine“. That was a hit song in Vienna in 1929 and that was the first song she played on the saw. Another member of the company tought it to her and taught her how to use a fiddler’s bow on the vibrating steel to get those long-drawn out, wailing notes that seem to come from nowhere.
So Camp-Show’s soldier audiences are being treated to a rare performance – a screen siren playing out of character, trouping like the staunchest vaudevillian on the Fox Hole Circuit because she wants to do her bit. At that, it’s nothing new for Marlene. She was in the first Camp Show unit ever to be made up on the West Coast.

New York World-Telegram, Thursday, June 22, 1945
Back from the fighting fronts where she was considered a good-luck omen since victory usually dwelled in her wake, Marlene Dietrich startled her fans by performing on a musical saw Tuesday evening on Milton Berle’s program.
When word got around that Miss Dietrich was to offer a saw solo the Blue Network was besieged by ticket seekers. Likewise all press agents remotely concerned with the show. One of the leggy star’s admirers telephoned agent Eddie Jaffe a dozen times. He simply had to have a ticket. Finmalyy he explained the reason for his anxiety. „Never in my life,“ he said, „have I ever heard anybody play the musical saw. I’ve just got to find out what sort of tone it has.“